An unlikely Rolex in those days. Even today.

It’s unlikely a Rolex at first glance, whether today or back in 1949. But this interesting timepiece is a historically-significant model in Rolex’s line-up because it represented Rolex’s abilities to compete with other major watch manufacturers prior to the distinguished success with simpler watches based on the Oyster Case. This invaluable piece of Rolex’s history never fails to create the buzz at the auctions. Let’s talk about the Rolex Oyster Precision Ref.8171 Triple-Calendar and Moon-phase wrist watch, affectionately known as the “Padellone”.

Not your usual Rolex

Flipping through the catalogue of May’s auction, I noticed something oddly familiar that brought with it quite some buzz from the watch media channels. This timepiece will never come across to many as a Rolex at first glance. In-terms of shape, colour and dial arrangements, this watch by Rolex is miles away from the design blueprint that has come to shape the impression of a Rolex for decades. Looking at a piece we have on hand now, I humbly pen my thoughts on this iconic and significant piece in Rolex’s historical line-up – the Rolex Oyster Precision Ref.8171 Triple-Calendar and Moon-phase wrist watch, or simply the Rolex Padellone. 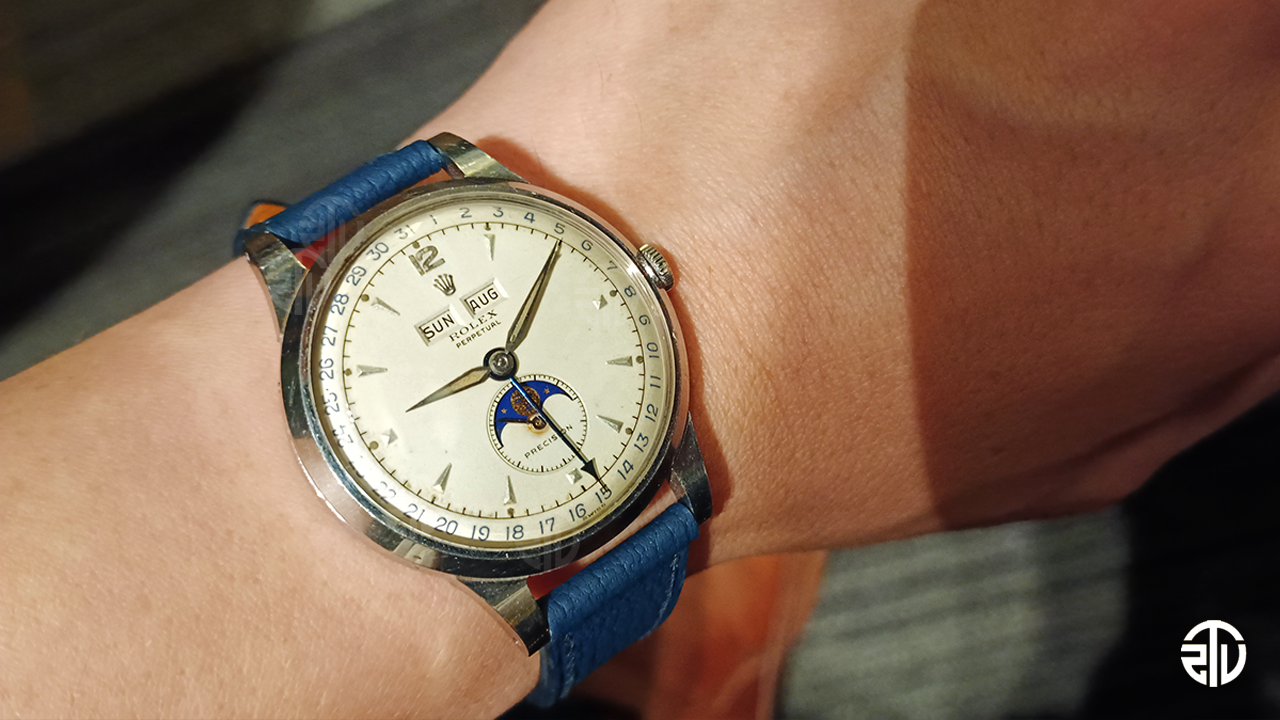 The seasoned vintage watch collectors are no stranger to the dial presentation of the Rolex Padellone Ref. 8171 because similar arrangements can be found across various brands, such as Omega, Vacheron Constantin, Jaeger Le-Coultre and Patek Philippe. Positioning the in-line day & month aperture at 12, below the brand mark, with moon-phase indicator at 6 and date on peripheral ring, is a common dial arrangement for watches with such complications, usually introduced between late 1940s and the 1950s. 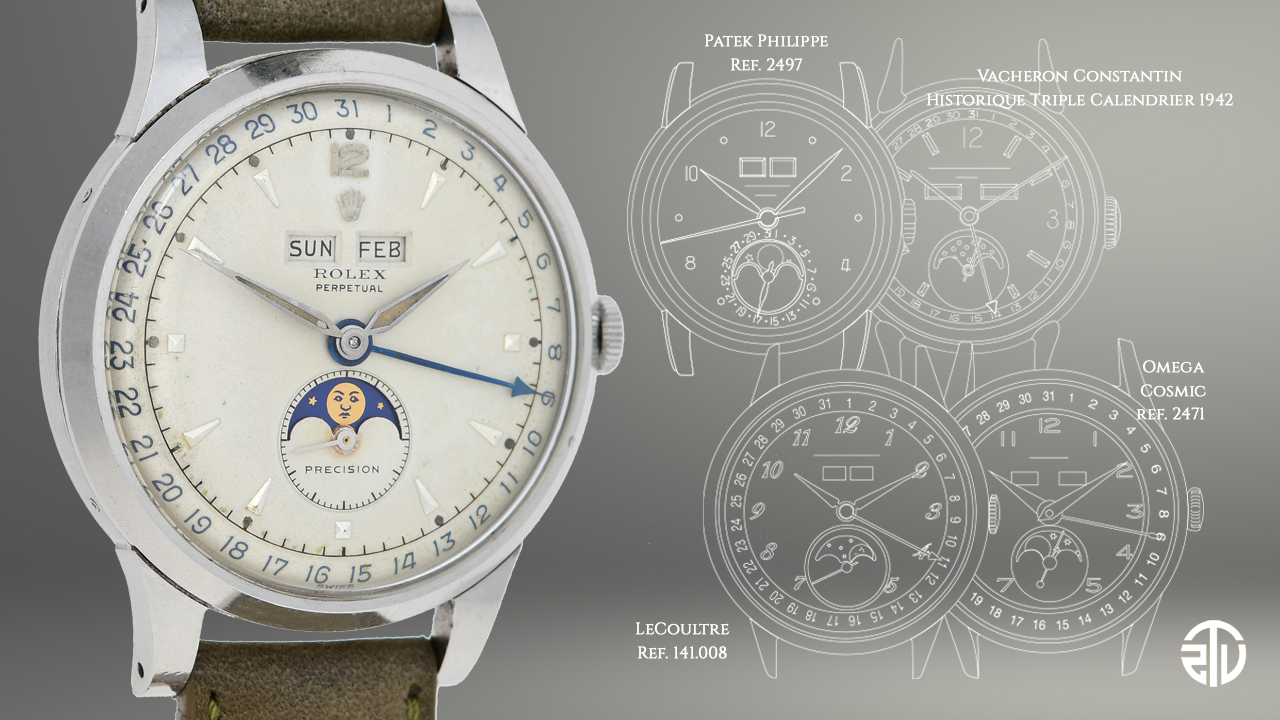 As with any vintage watches, the small details matter. Placing the Padellone Ref. 8171 toe-to-toe with others with the same complication highlights their differences, with the most distinct being a superior balance in dial arrangements.

Every elements on the dial are positioned with a comfortable breathing space between each other. 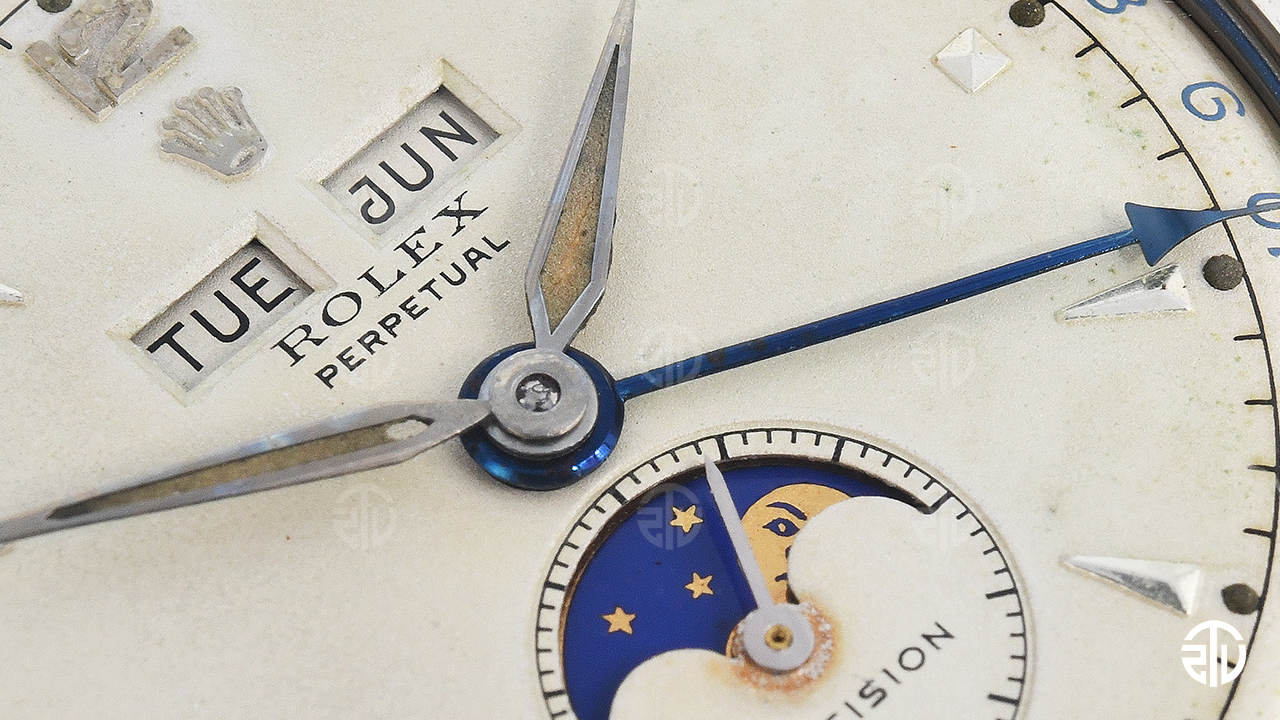 The Padellone offers a few dial variations, with known examples spotting different hands and markers, and in different material. This example we have on hand is a Stern Frères dial presenting applied dart markers in steel, which are sized in good proportions and helped create a generously-spaced and clean dial. The gold enamelled moon and calendar disks are also by Stern Frères. 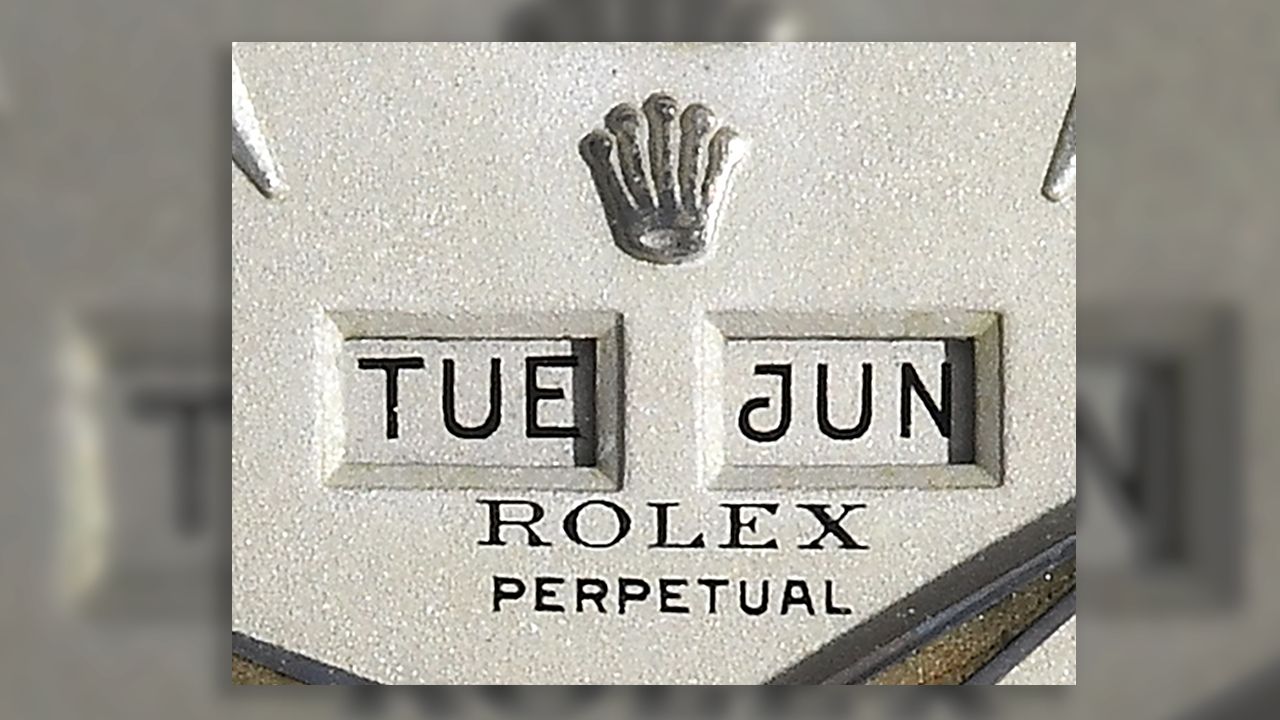 The minute track coming before the dates clearly demarcates the time and date ring for visual clarity. It is worth nothing that a unique piece without the full track surfaced in 2020 at Sotheby’s. Comparing to other watches with the same elements and complications, the Padellone’s sweet spot would be the day & month windows, which are perfectly positioned. Not too close and not too far apart. 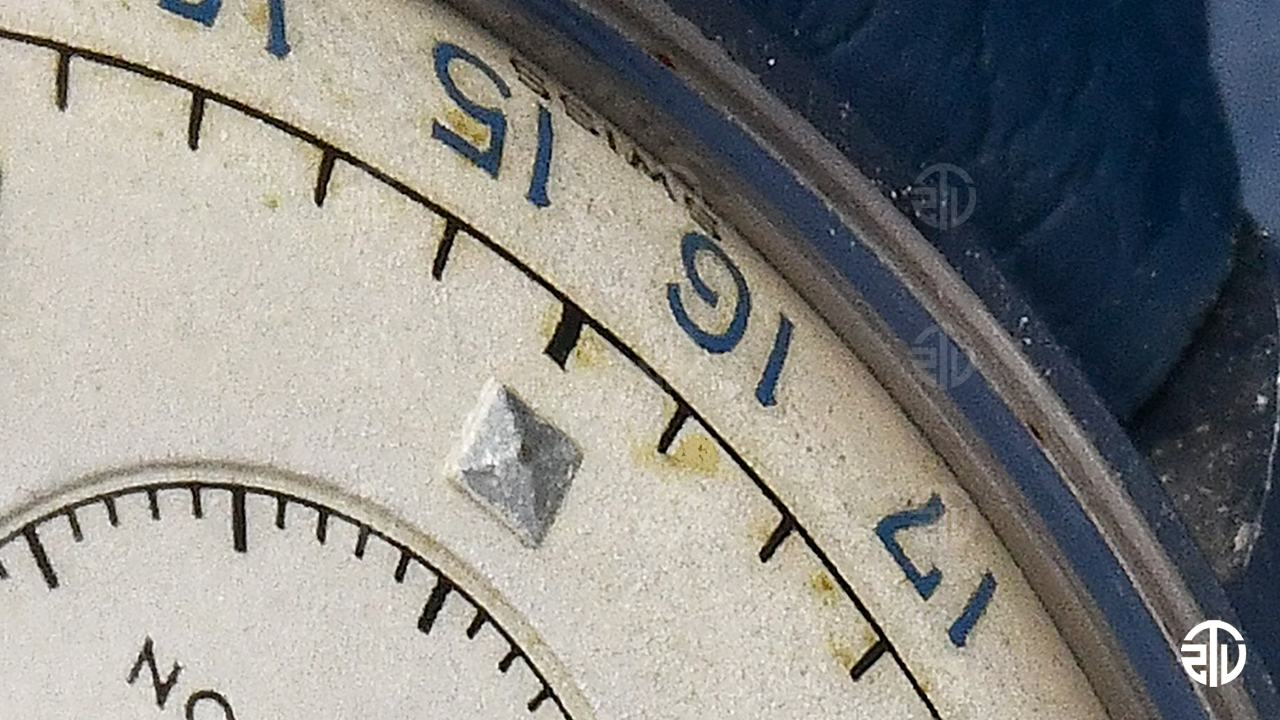 What seems like a crème dial on the Padellone is in-fact on closer inspection, grainé finishing on the dial which tends to turn off-white overtime. Loupe in on the dial and one would notice the date chapter ring reflects a different grainé finishing – coarser and darker if you will, which in some examples formed a contrasting 2-tone shade on the dial. 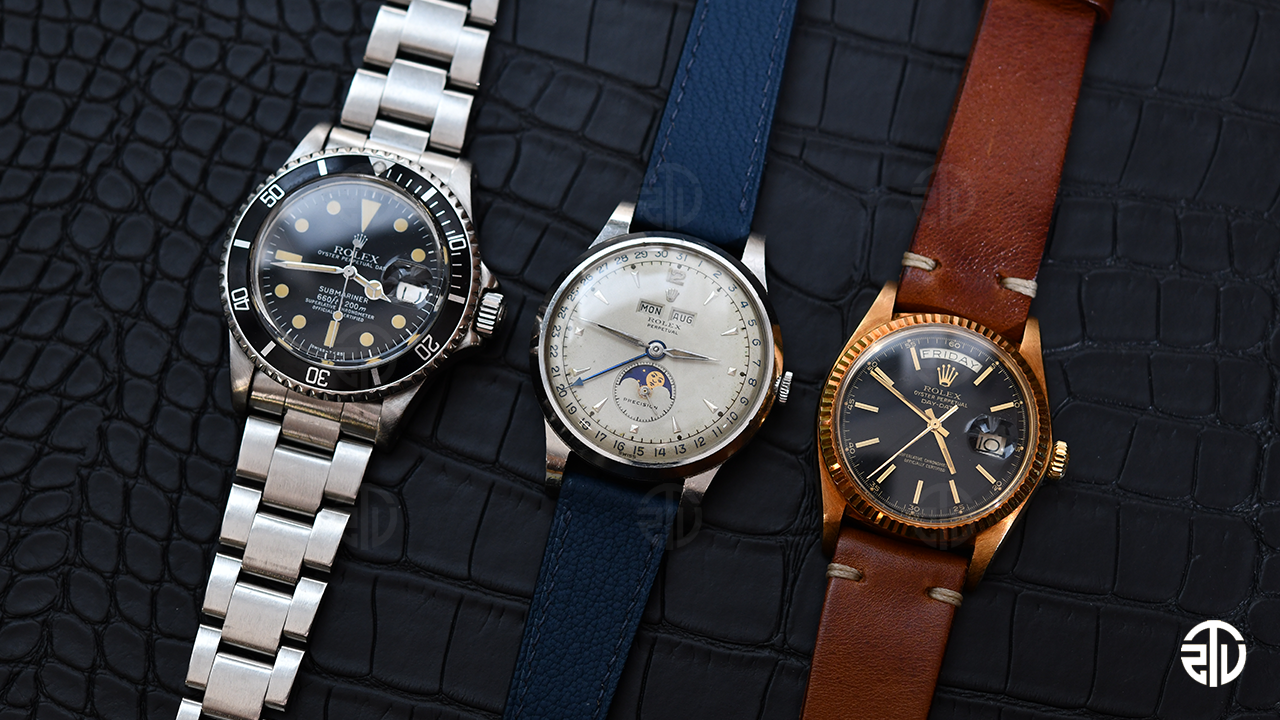 A Case Of Identity

Since the introduction of the Ref. 6062 in 1950, Rolex watches have consistently adopted the Oyster case which is in-large, round-shaped but I did find some literature qualifying it as a tonneau, if we include the link-ends and look at it as a whole. Let’s just say, the shape of the Submariners, GMT Masters, Explorers and even the vintage Day-Dates have shaped and determined the look of a Rolex in the minds of many. 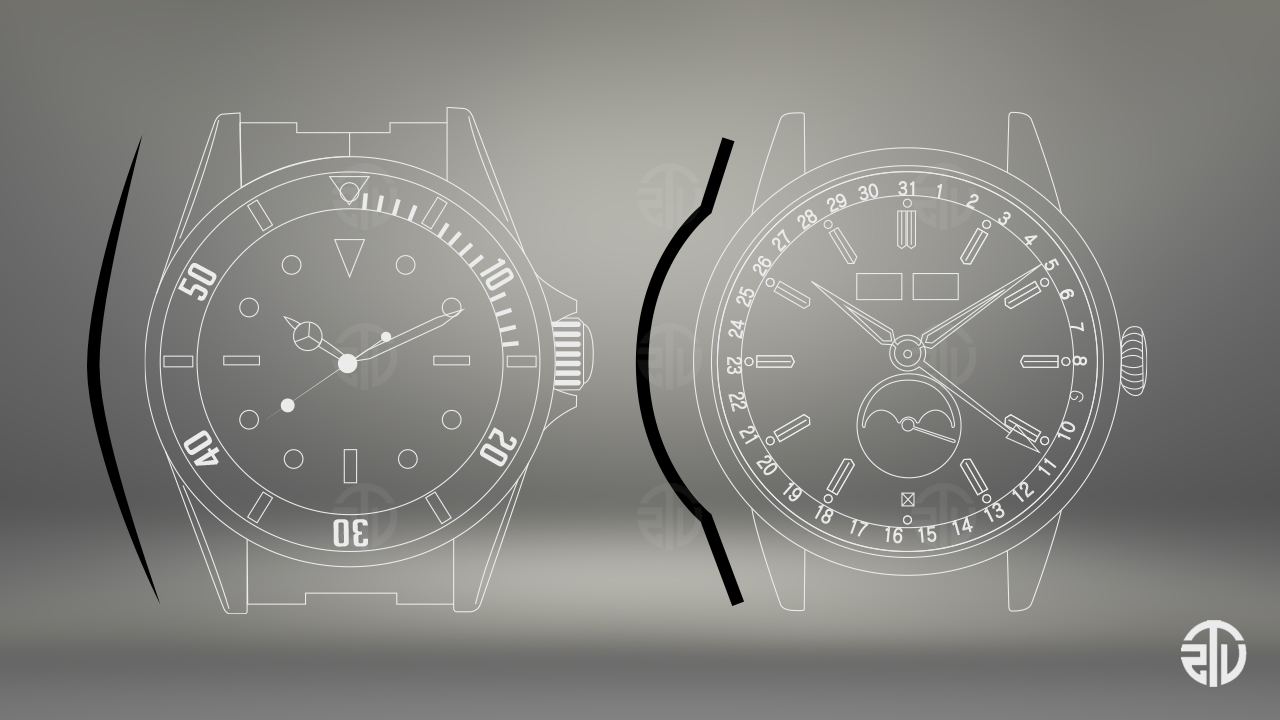 The Padellone is clearly round but not in a way that defines a Rolex, and characteristically rejects being streamlined along the beefy lugs. The case and lugs were distinctively separate. What makes the Padellone stands out from the other Rolex siblings would also be how the crystal and dial stretches out to the edge, leaving a very thin bezel (actually the case). The only other references with a similar form would be Ref. 3335 from 1939 and Ref. 4113 from the early 1940s.

Perhaps, it is out of competitiveness that Rolex decided to enter the scene with its first Triple Calendar and Moon-phase watch in such a shape, for other established maisons have already introduced such complications in round-shaped cases since the early 1940s. Rolex might have been late but made a grand entrance they did. Interestingly, within a short production span of 2 years, the Ref. 6062 was introduced with the same complications to be the Padellone’s successor, only this time, in the waterproof Oyster case that we are all so familiar with. 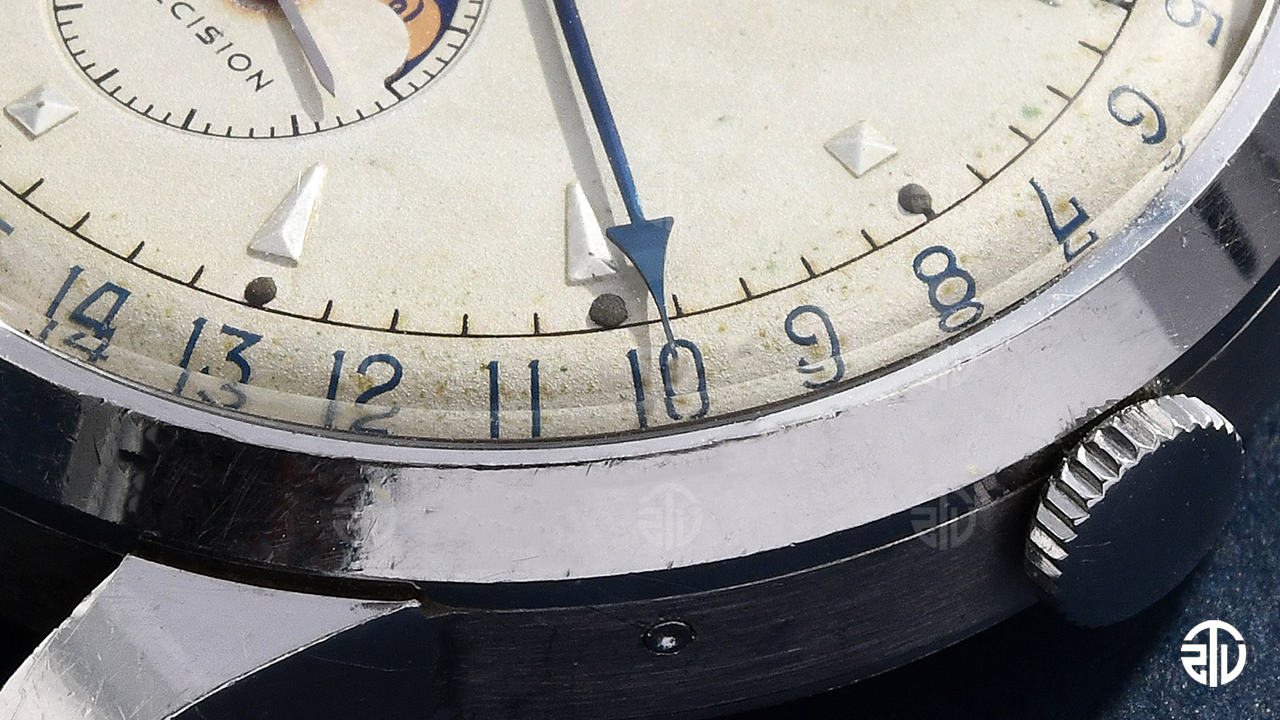 The word Padellone, meaning “large frying pan” in Italian literally describes the size and shape of the case and dial. In my opinion, this nickname is totally apt for describing the caseback.

At 38mm, the Padellone is unconventional for its time, adding to it’s collectability. The edge of the dial curves in and sits high within the case. Together with a sloped bezel, the nickname Padellone is simply befitting. Powered by the 13”” Calibre 295CPL or A296 specially developed for the Padellone, the Padellone and Ref. 6062 till date holds the title as the most complicated vintage Rolex watch with in-house movement.

Prior to the debut of the Cellini Moon-Phase in 2017, The Padellone and Ref. 6062 was the only Triple Calendar with Moon-phase wrist watch offered by Rolex. That’s a whopping 67 years apart!

An estimated 1500 pieces of Padellone were ever produced between 1949 and 1952 with steel models forming a majority, standing at an estimated 800 pieces, and around 700 pieces in rose gold and yellow gold respectively. A short 2-3 year production span makes hunting for the collector-grade Padellone a journey worth writing about, especially with very limited examples surfacing on the market. For example, out of 800 stainless steel models produced, only 95 examples have been identified back in the market; Out of the 1500 pieces produced, only 190 pieces of all variations are identified back in the market. 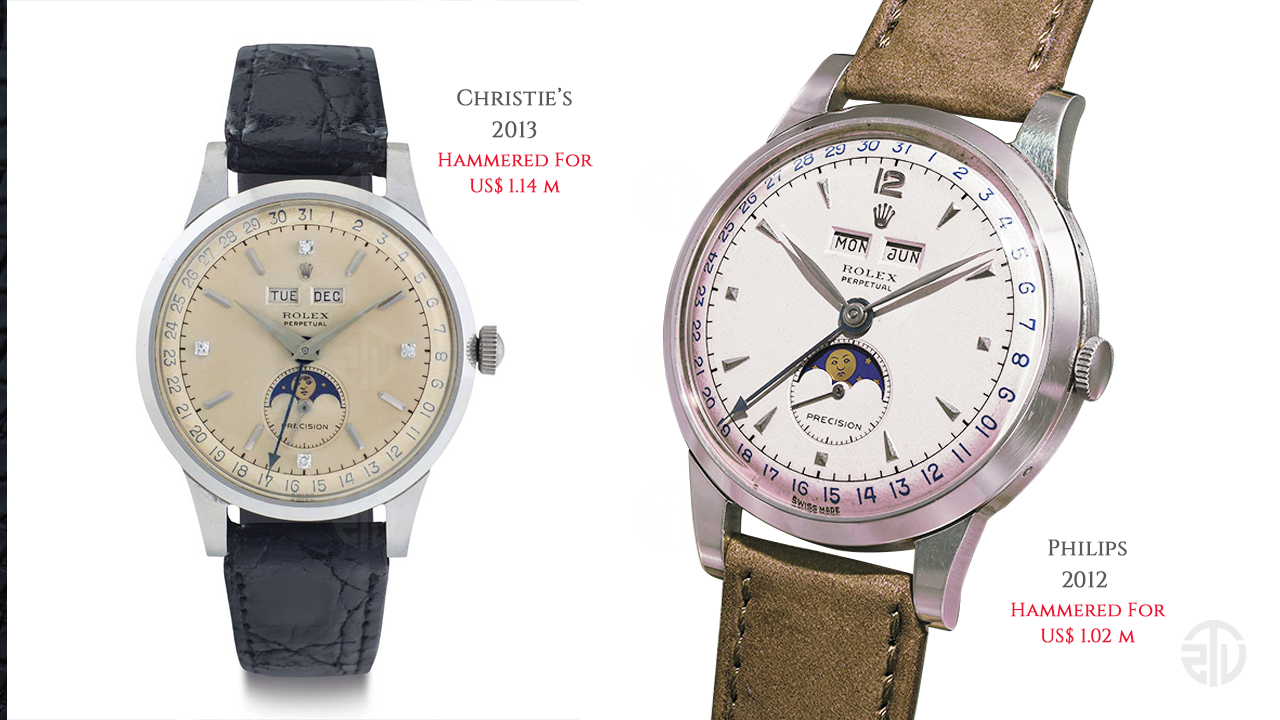 In 2004, a Padellone was auctioned at around USD 242,000. In 2013, a fine and rare example with a beautiful patina on its dial and diamond markers was hammered at around USD 1.14 million; a first for the Padellone to hit the 1-mil mark in Christie’s, New York. The Padellone broke the 1 million mark once again in 2016 with a steel model. Over the years, auctions recorded varying prices influenced by material, condition and status of the market then. The top 3 record holders for the Padellone are all made in steel.

The Padellone is neither a super-rare auction superstar nor is it easily accessible, especially one with all the right conditions. But what I can say for sure, is that the Padellone and Rolex Ref. 6062 are getting rarer with time, and they are set to break auction records habitually. I believe the Padellone is definitely enroute to becoming a true unicorn in the watch curating scene.

The Padellone at 2ToneVintage Watches never fail to garner enquiries from both walk-in customers and the internet, just like how it’s appearance at every auctions is a topic of the day. In my opinion, the Padellone Ref.8171 is a highly valuable and collectible auction-grade vintage that only the most discerning of collectors will appreciate. Historically, the Padellone is in a league of its own and shall remain one of the most iconic watches of Rolex beyond present day. 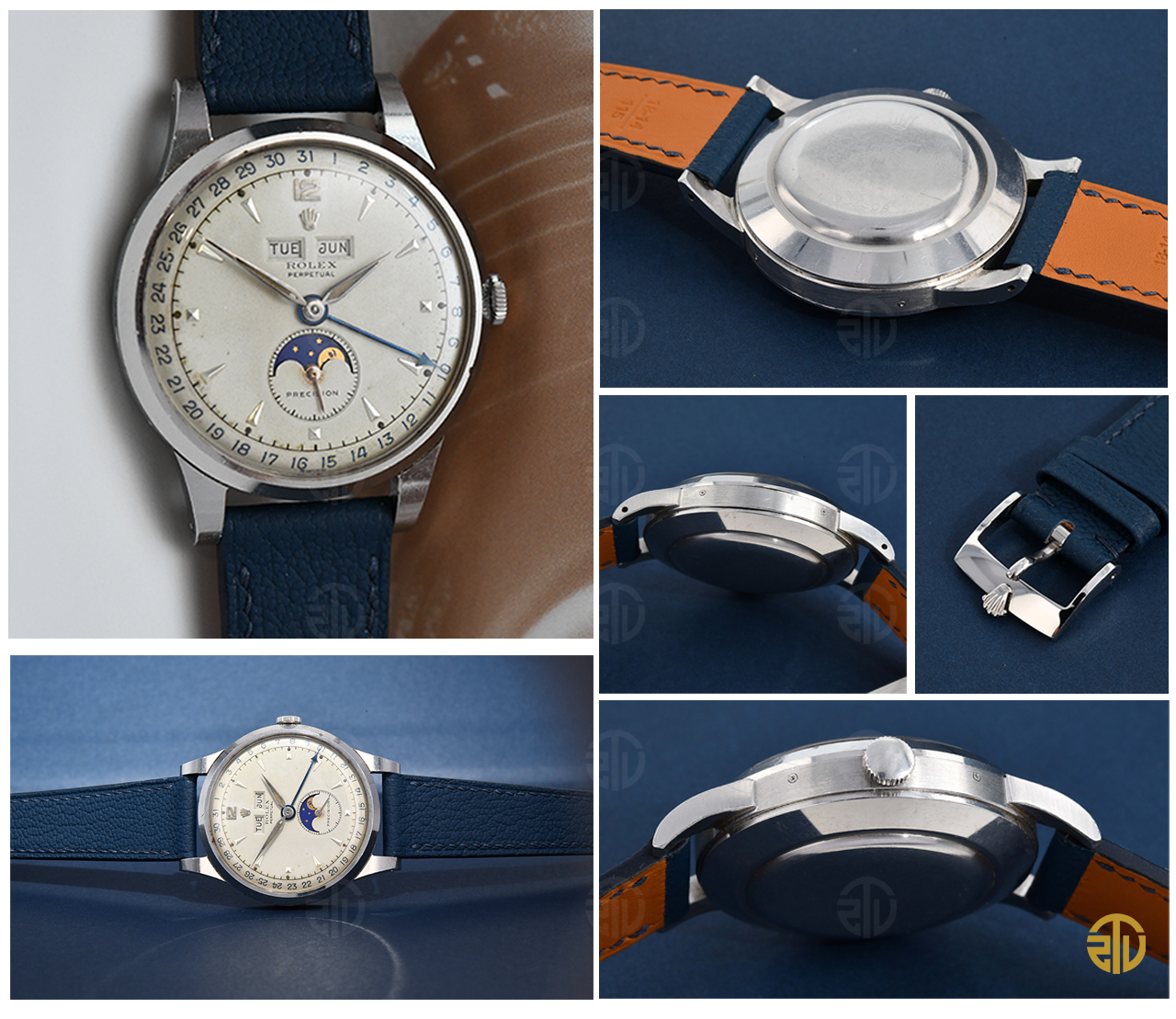 2tonediscovery content are proprietary properties of 2ToneVintage Watches, its affiliates and contributors. Reproduction in any form, whether digitally or in writing without prior written permission from 2ToneVintage Watches, its affiliates and contributor of the article is prohibited. For permission to reference this article and graphical content in this article, kindly write-in to timothy.ng@angroupco.com.

Be the first to review “An unlikely Rolex in those days. Even today.” Cancel reply