An Officer & A Gentleman – Part II

An officer & A Gentleman

We say it’s both! In the history of men, and the archaic 14th century social class system of England, a gentleman is a man of good family; one which is able to live without manual labour and entitled to bear arms. So in the olden days, an affluent individual that is not a peasant or serf, is entitled to bear arms, and it was the affluent or those who can afford to, who went on continental wars for Queen and country! They are not necessary soldiers but definitely lead men into battles and expeditions. The background, wealth and societal status pretty much sums up who the gentlemen were.

The definition was however fluid, changing with the socio-political environment of England with every major events but perhaps, the highest expression was by Sir Richard Steele, who wrote in 1714 that “the appellation of Gentleman is never affixed to a man’s circumstances, but to his Behaviour in them.”

In today’s context, an Officer is a leader of men. He is expected to show in himself such qualities as he desires to bring out in those under his leadership, such as virtue and honour. A true gentlemen is defined by his behaviour.

So what is the connection?

The Patek Philippe Officer Calatrava is both an officer watch and a gentleman’s dress watch. In the first part of this article, we travelled back in time to explore the roots of the Officer Watch. Let us discover how the Ref.3960 is a gentleman’s dress watch and the unique traits of the Calatrava right here, in Part 2 of An Officer and A Gentleman.

When Patek Philippe introduced the Calatrava in 1932, the aesthetic qualities was a big shift away from their earlier models influenced by elaborate designs of the Art Deco era. The Bauhaus-style design of the Calatrava points to the concept of form following function, where the focus was on telling the time in the most straightforward and presentable manner possible, eradicating any lines, protrusions or obtrusions that is unnecessary and non-functional. It was a time when the Bauhaus movement was shaping everything, from lifestyle appliances to furniture and architecture, and the wristwatch captured just that. The birth of the Calatrava introduced the term Dress Watch, with its slimmer and smaller profile which can fit under the cuffs of any gentleman’s tie-and-jacket outfit.

In our opinion, a dress watch should have the following qualities; 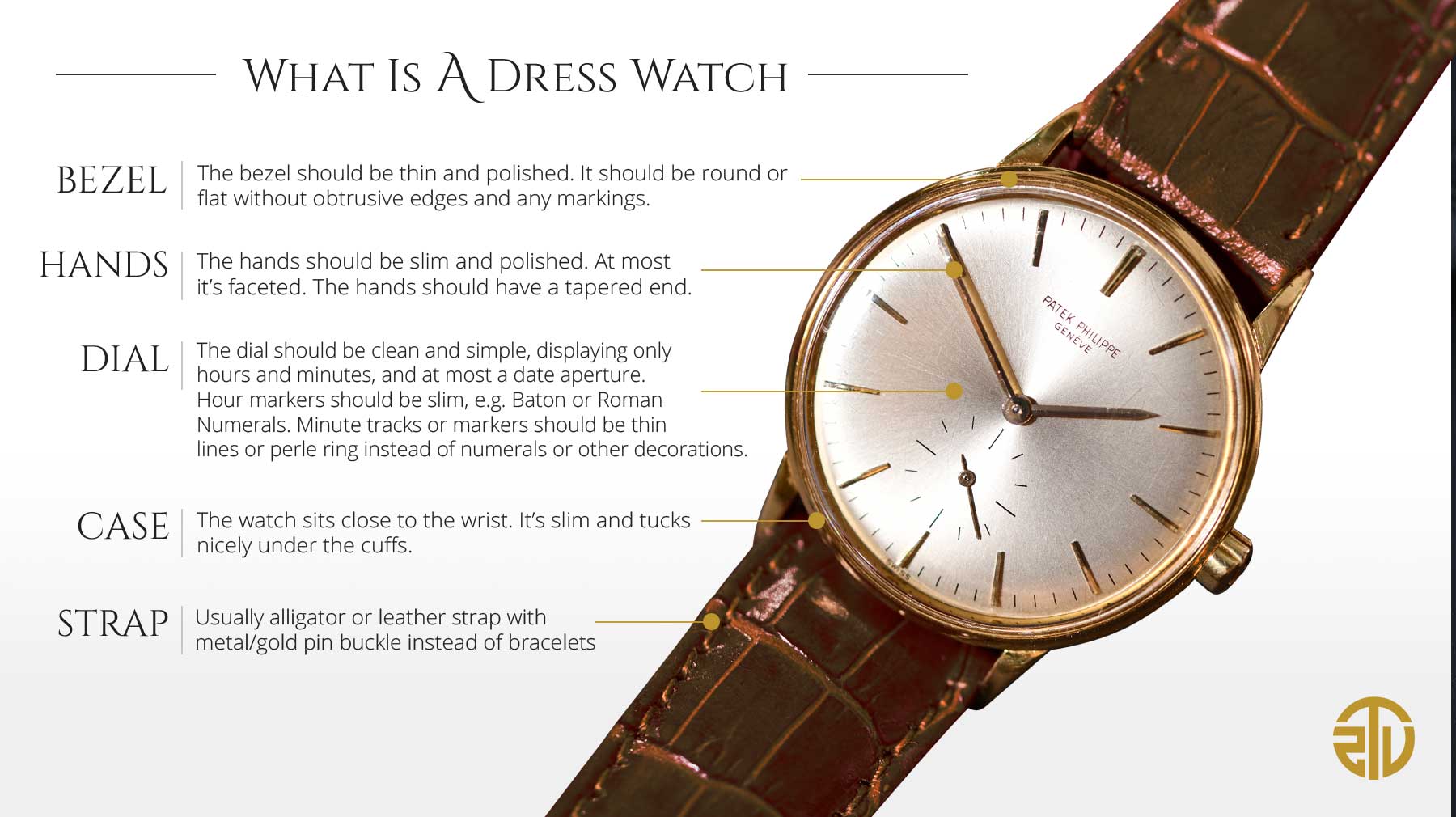 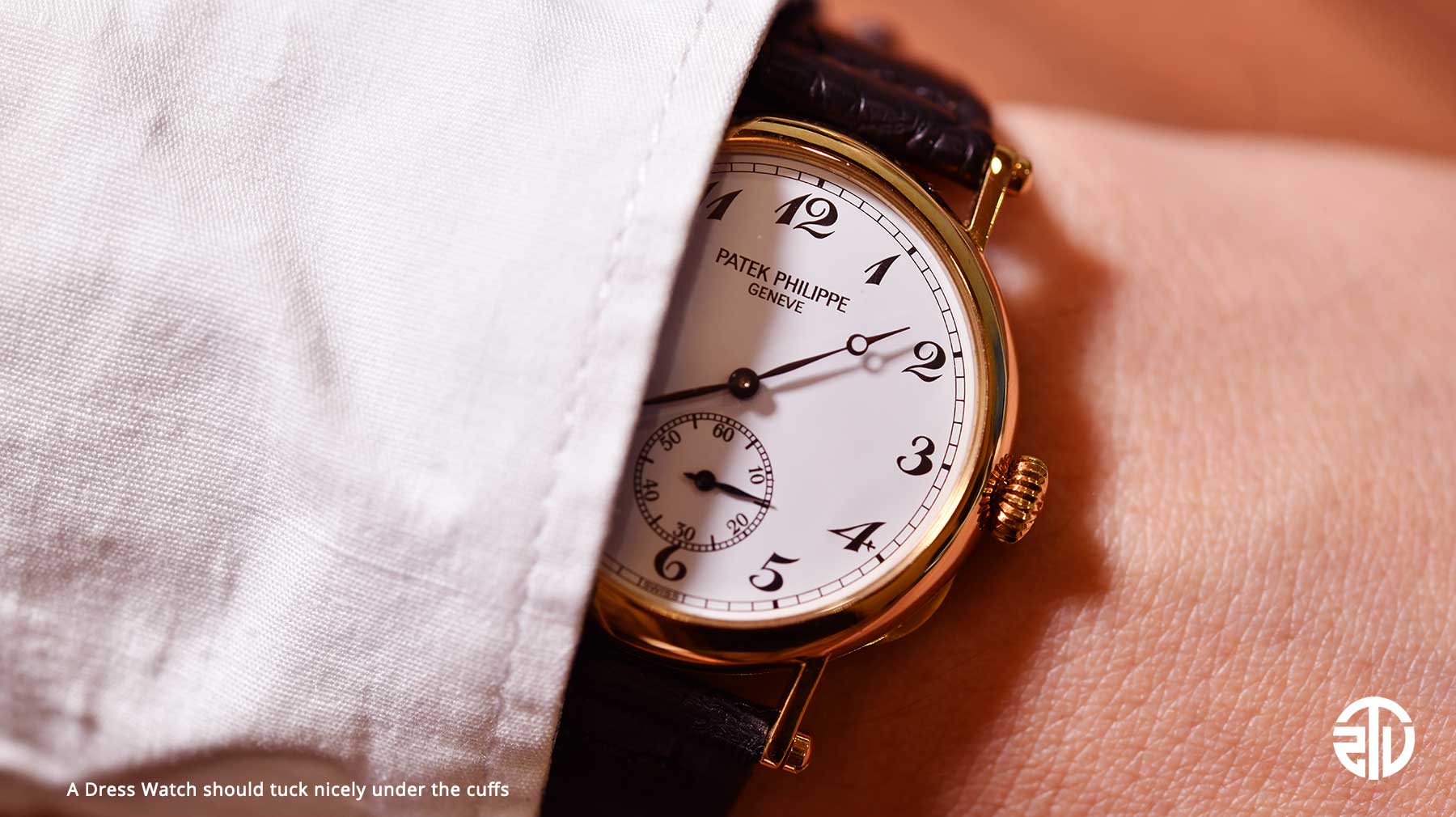 The Officer Calatrava Ref.3960 in all perspective qualifies for the gentleman status. At only 8mm thick, the Ref.3960 can fit under the sleeves and cuffs of any formal wear, and this height includes the hinged-hunter caseback of course! We are sure many are no stranger to modern chronographs and sports watches sticking out sorely and forcing the sleeve and cuffs up the wrist.

Back in the 1930s, a 35mm watch would have already been considered oversized with average case size between 31 to 33mm. In today’s context, even the oversized watches of yesteryears are considered small. We might have all grown bigger in average size but if we jump into the trenches of World War I, where the wristwatch for men made history, the smaller size is really practical. 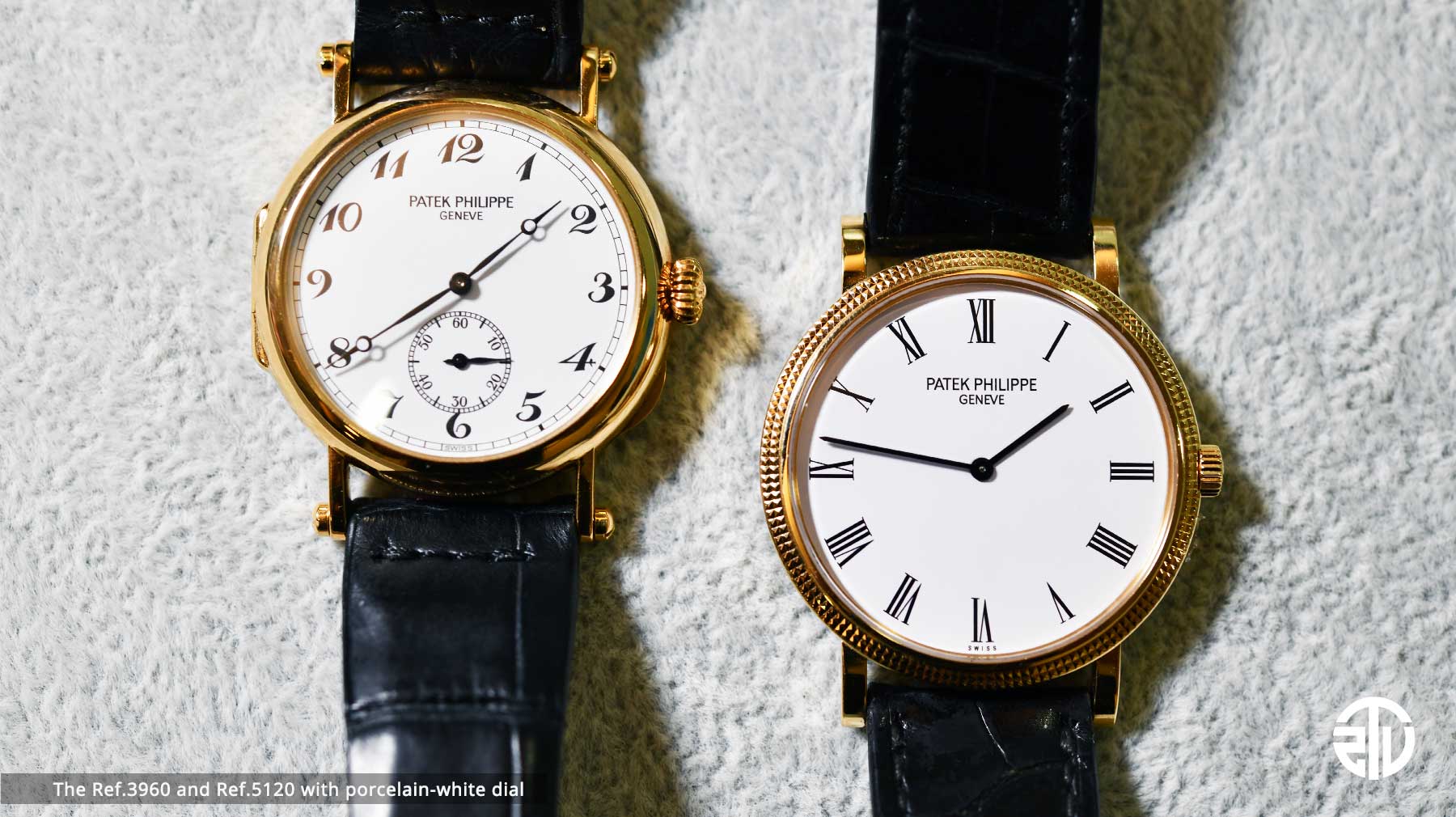 The dial is a white, glossy porcelain-white dial, reminders of clocks and pocket watches from a distant past. Most of the Calatrava dress watches are offered with a sunburst silvered dials but there also a few references that offer the watch with a white dial, in both matt and glossy variations. 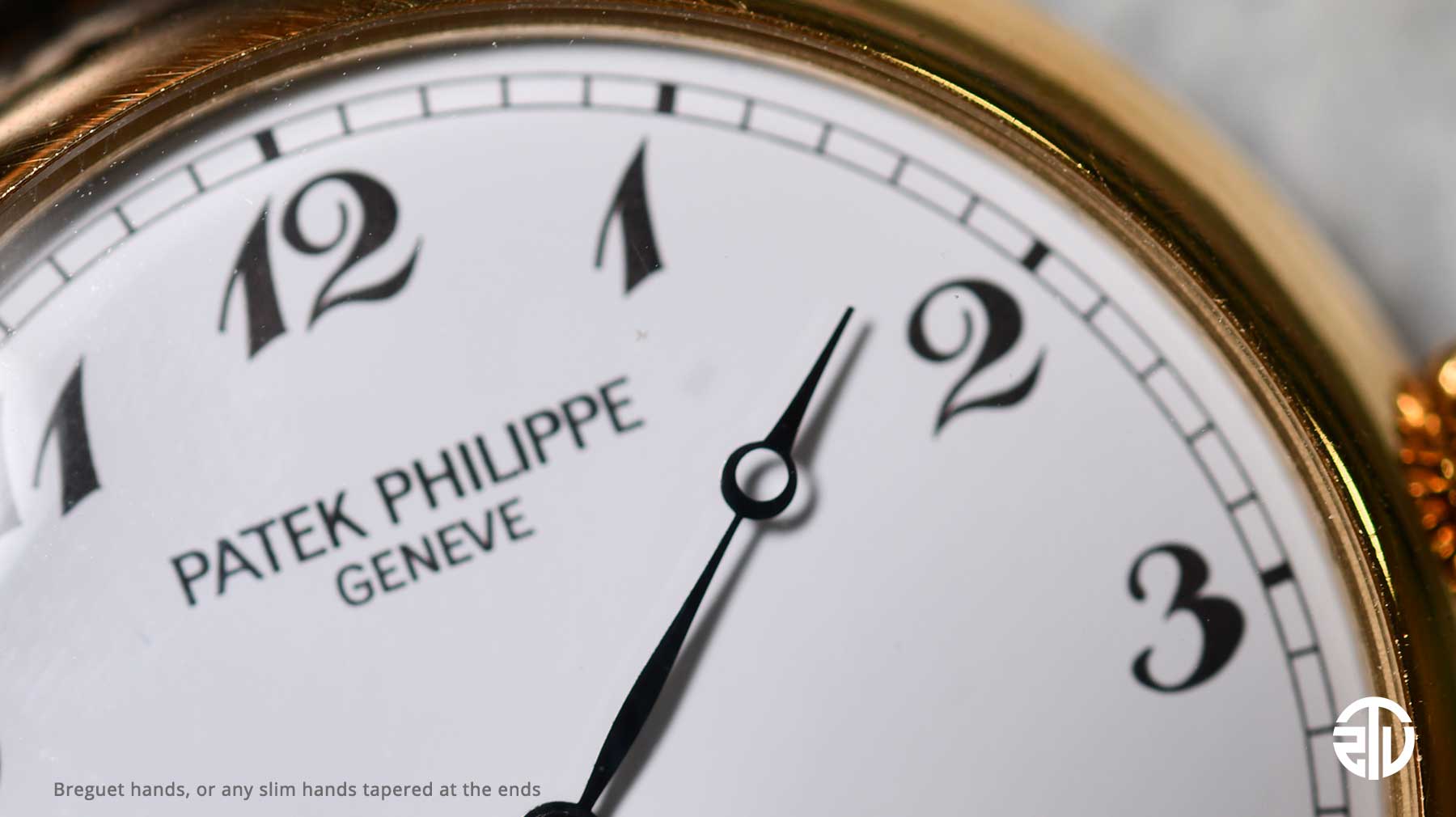 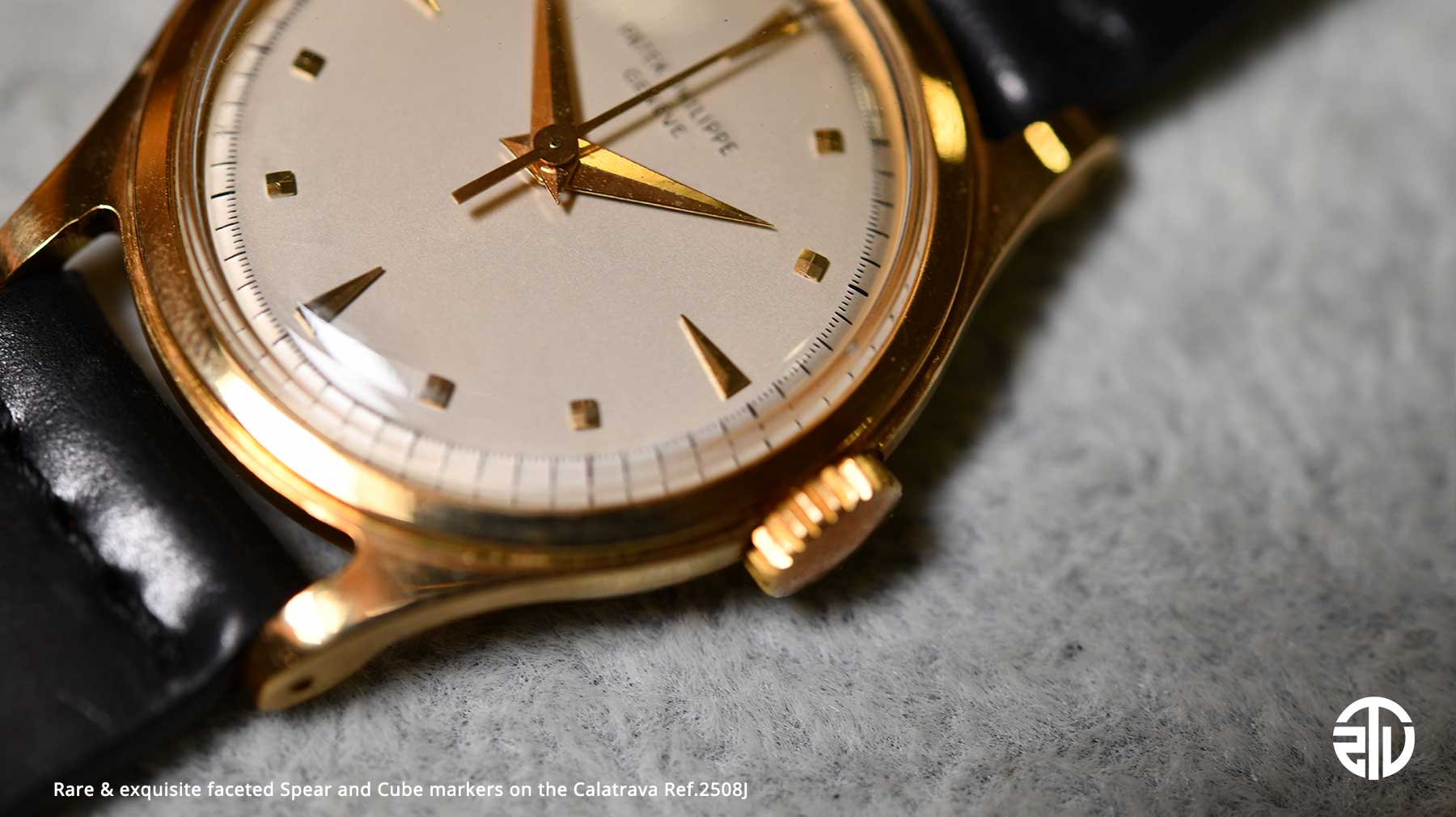 Disregarding rare and limited renditions such as diamond markers or diamond bezels, the accoutrements on the dials of a Calatrava watch mostly came in the same material as the case. Time is marked with applied, faceted Baton markers or Arabic numeral markers. A feuille, or baton hands point out the time. In the case of the Ref.3960, the Breguet hands and Breguet numeral markers did little to shift the watch away from Bauhaus-style.

Whether it is a sunburst silvered dial or a porcelain-white enamel dial; or whether it’s a baton marker or Breguet numeral markers, the clean presentation still points the Ref.3960 back to the Bauhaus-inspired design. To strengthen its status as a Calatrava and in tribute to the old world antiquity, a subsidiary second sits at 6 o’clock, just like the first Calatrava, the Ref. 96. 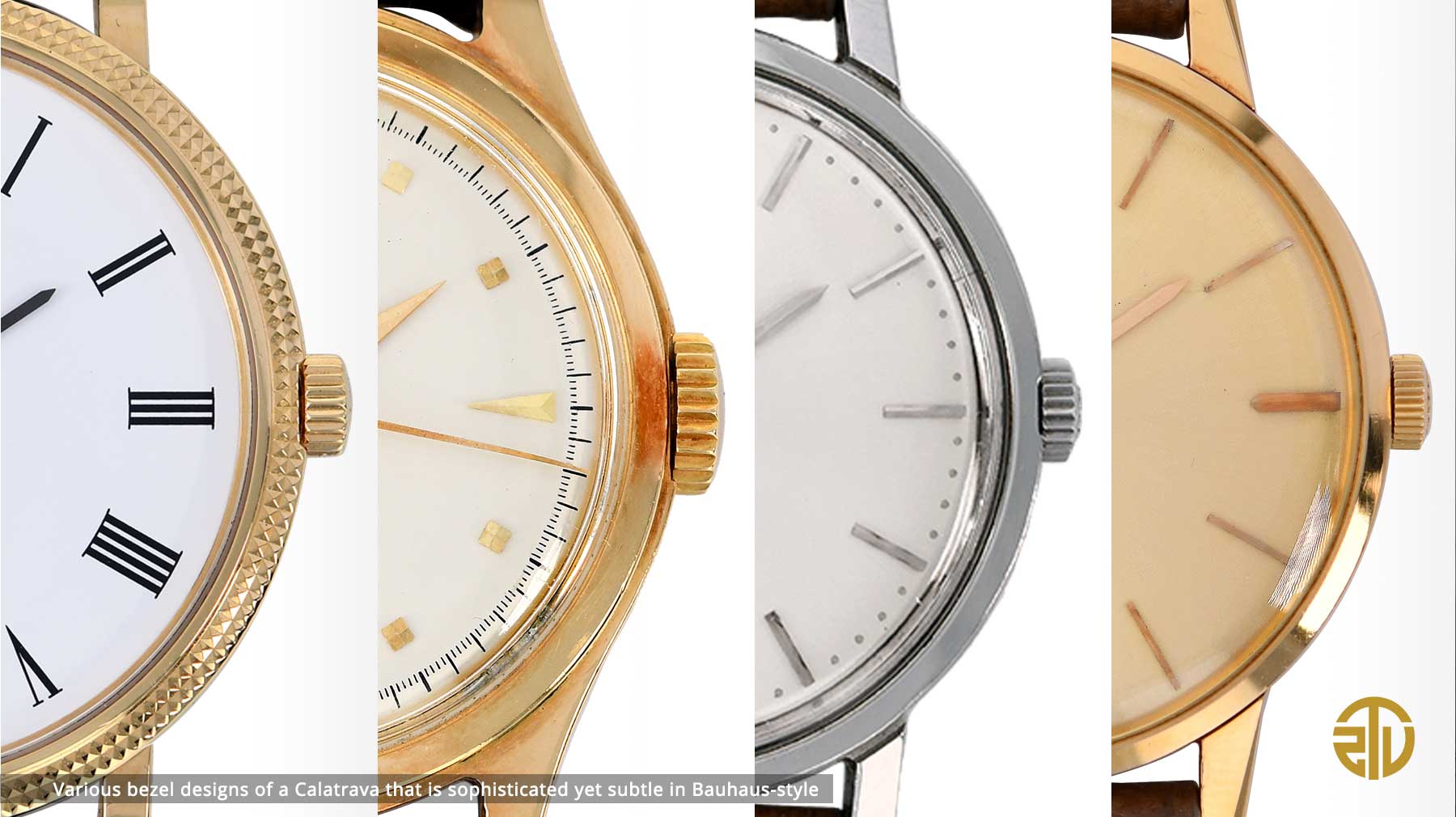 The dress watch in its purest form should have a minimalistic bezel that is polished, thin, round-edged or flat. There should be no intrusive edges or surfaces (e.g. notched, fluted) like what you see on modern sports watches. In some ways, it has become a standard impression that a sports watch must have a marked bezel that can rotate, or bulge out from the case in the loudest manner possible. The obvious signs of a dress watch is a simple and slim bezel which on some watches, are diminishing into the case band itself. E.g. Nomos.

Interestingly, as plain as the Calatrava might seem with clean minimalist dial and bezel, various references from the Calatrava collection offers unique bezel design. Look closer and one will find a subtle sophistication in how the Calatrava is designed. There are even examples with hermet cases. In the ways of the gentleman, the Calatrava 3960 is well-mannered in all angles.

So we identifies a leather band as one of the definitive traits of a dress watch. As a commemorative model with limited production run to celebrate Patek Philippe’s 150th anniversary, we are pretty sure that a commemorative model with integrated gold bracelet isn’t too much to ask for. For the same reason why a dress watch should have a leather band, the Ref.3960 presents a much more unstated elegance with its black crocodile strap. To some, a leather strap is still a more elegant option than gold or metal bracelet (Totally subjective).

We see that the Patek Philippe Officer Calatrava Ref.3960 is a Calatrava in the form of an Officer’s Watch. It reeks of old world antiquities in modern world material and also pays homage to the enduring and timeless design language of the Calatrava collection. In all honestly, any time-only wristwatch with minimalist dial and case design can easily look like a Calatrava, or a gentleman’s watch in today’s context. It is a style that even other brands embrace, especially in the 1940s and by the 1960s, the “Calatrava” look has come to define what a gentleman’s dress watch should look like.

There are definitely mixed feelings about a 33mm dress watch today but in our opinion, the Ref.3960 isn’t the usual Calatrava that you will wear as an everyday watch. It is a collectors’ item, especially for the fervent Patek Philippe collector. In all aspects, the Ref.3960 is in no-doubt An Officer and A Gentleman.

Calatrava Ref.3433J Gubelin1962
Out of Stock
Join The List